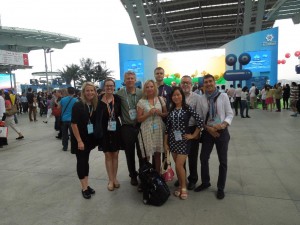 “Best trip yet,” reported Art Copyright Coalition (“ACC”) member John Chester of Wild Apple.  Six art licensing & publishing companies attended the October 2014 Canton Fair and Jinhan Fair in Guangzhou, China.  The group has attended 5 of the last 6 shows, which occur in April and October, as part of a long term strategy to combat counterfeits and support their legitimate licensees. “It’s definitely a marathon, not a sprint,” said Lonnie Lemco of World Art Group, “but we do seem to be picking up speed.”

While the ACC still encountered many infringements, they estimate a 60% to 70% reduction over the last two years in the amount of counterfeit product offered at the shows.  “If it were your first time coming to Guangzhou, you’d be horrified at how much copying is going on,” said Monique Van den Hurk of Kunstanstalten May, “but it’s way down from the absolutely devastating amount we saw in 2012. It’s definitely going in the right direction.”

Sarah Ruggieri of Sun Dance Graphics said, “We all know intellectual property theft has been a cultural norm in China. Many, if not most people running these factories are not aware of the laws. Our mission as a group involves a hefty amount of education as well as some finger wagging.” Notes are taken on each infringer and those whose copyright profile is improving. This way a log is being formulated to track factories that are moving in the right direction and those who continue to disregard copyright laws.

Some Chinese exhibitors admitted that they have lost customers because they had been caught selling illegally copied designs.  ACC members travel and attend shows the world over and constantly network with each other regarding suspected infringers.  Customers who legitimately license artwork are particularly effective copyright watchdogs.  In one instance at this most recent show, a ceramics licensee found an infringer using the same designs they have under contract.  An emergency email went to the ACC, who were able to visit the infringer at the show and convince them to remove the offending product.

The ACC noted a marked increase in requests to license artwork, and some ACC members are beginning to test the licensing model with Chinese manufacturers.  “We are really cautious about who we work with,” said John Chester of Wild Apple. “At this point we are testing the concept on a very limited basis, and evaluating if trust and a track record can be established.” In a few cases, Chinese exhibitors used their official licensee status as a marketing tool.

One negative trend noticed by the ACC is the increased use of multiple design elements that are combined into a new piece, such as taking an image of the Eiffel Tower from one image (or artist or publisher) and combining it with a butterfly from another.  The incorrect notion is that the Chinese designer has changed the image so that it is therefore not subject to copyright law. ”We saw a lot of this kind of design mash-up,” said Mauro Torre of Top Art. “The only good news about it is that the images look horrible!”

“I think we are at the beginning of a slow but steady sea change regarding copyright protection in China,” said Lonnie Lemco. “Respecting copyrights will only happen when it is in their interest, and we’re near the tipping point when having a good reputation is a requirement for growth.”